The Network Hub is home to a great variety of creative people in a range of industries. One such individual is Nick Romick. Founder of the VanCG Meetup Group, Romick is collaborating on an exciting new film project called Galactic Battles. We recently had the opportunity to speak with Nick about it.

What is Galactic Battles?

Galactic Battles is an open movie project, put together by some of the members of the VanCG Meetup Group in Vancouver. The purpose was to have a collaborative project that people from the local VFX community could get involved in that would produce something that people could use for their demo reels, as well as help get them working side-by-side with other people in the industry.

The film itself is a cross-franchise battle, introducing ships from Star Wars, Star Trek, Mass Effect and Halo, putting them all into the same place, forcing them to ally with each other to see who comes out alive. 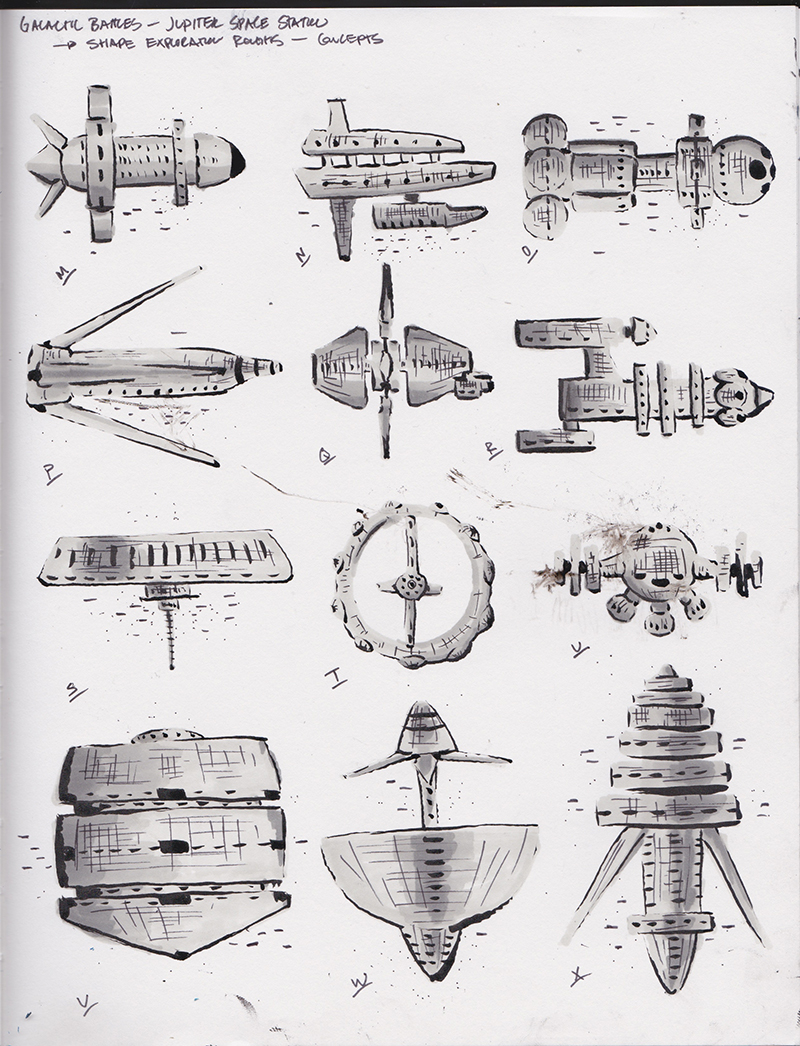 What is your background and how did you get involved in the project?

I originally started getting into 3D back in 2001 and have been an avid artist ever since. I went to school for 3D Modeling, Animation & Digital Compositing in 2006, and have taken a bunch of courses and training since. I work in the film industry now, working for Method Studios in Vancouver.

I started this project because I wanted to work on a collaborative project a lot like the Blender Open Movie Project, Big Buck Bunny. It was a project that anyone worldwide could work on, and they did so because they were passionate about it, and wanted to work on a team project.

I’ve always loved Star Wars and Star Trek (and Sci-Fi in general), and so I decided to make something that combined a bunch of different franchises and that adopted the same base concept as the Blender Open Movie Project.

Who else is on the Galactic Battles team? How did they come to join the team?

We currently have a team of about 20 artists, 2 sound designers, 5 voice actors (including Mark Meer from Mass Effect), 1 dedicated screen-writer, 2 social media coordinators and a few more.

Originally, we formed a core team of 5 at the tail end of 2013, who all met me at the VanCG Meetup events. We all had a passion for Sci-Fi and Visual Effects, and decided to just go for it.

I have met a lot of people at VanCG Meetup events, through work in the film industry, and people that have randomly found me on the Internet (Twitter, Facebook, Google, etc.) who were as equally passionate. The bigger the project became, the more people wanted to be part of it.

Since this is open source and there is no pay involved, this must be a real work of passion. Where do you find your inspiration?

I tend to find a lot of people who are really interested in the sci-fi franchises themselves. I know I get my passion and inspiration from the other team members, and since I am a big fan of all of the franchises. I’ve loved Star Wars since I was a little guy.

Have you encountered any copyright claims from the people behind Mass Effect, Star Wars, Halo and the other franchises depicted in Galactic Battles?

No. We have been following the content usage guidelines for each franchise very closely, as well as making sure we are on the right side of the Canadian & US Copyright Laws (Fair Dealings and Fair Use Clauses, respectively), so as not to get sued.

We’ve actually gone the extra step and spoken to the Director of Global Product Marketing for Xbox (Halo), the head Attorney for CBS/Paramount (Star Trek) and we are actually being sponsored by EA Games (Mass Effect). I like to maintain a good relationship with everyone I can.

What has been the biggest technical challenge?

Combining live action with CG is no picnic. Well, doing it right isn’t, anyways. For the film, we are going to be doing all digital sets, but that’s not the trickiest part.

One of our alien characters is going to be half-live action and half-CG. His body is going to be a live person in a suit, and his entire head is going to be all CG. I was very hesitant to do it at first, but we were lucky enough to get a hold of Paulo Welter, who modeled the ‘Grievers’ from The Maze Runner. He is working with our very talented texture artist, Tristan Rettich, so I know this task is in good hands.

What hardware and software has the team been using?

Most of our artists are using PCs, but a few of us are using Macs. AMD was gracious enough to supply us with one of their high-end FirePro W7000 video cards, and NVIDIA sent us a few Quadro K5000s to help us out with some rendering power.

We are using primarily Maya for modeling and animation, Nuke for compositing, and Premiere Pro for editing. Massive Software has given us a free license of Massive Prime (crowd software) for any extensive space battle scenes. Some of our texture artists are using Mari for Digital painting.

What has your experience been working with team members who may not be in the same physical location at the same time? What collaboration tools are you using?

The pipeline process has definitely been our biggest learning curve during this project. We are working with mostly people from the Greater Vancouver Area, but we have some people in California, Alberta, New Zealand, etc. so working with collaboration tools are a necessity.

We are using a PHP forum for discussions, Google Drive for storage, Email for updates and Confluence (Atlassian) to create and share in-house training and reference documents.

We also meet once a month to go over the status of the project, discuss ideas and assign the tasks for the month. We do this at The Network Hub in Downtown Vancouver.

Tell us more about the VanCG Meetup group.

I am the Founder and Event Organizer for the VanCG Meetup group in Vancouver. I originally started the VanCG Meetup back in 2012, as there seemed to be a great need for Visual Effects / 3D Animation social networking events.

The first event ever was a great success with almost 100 attendees. Since then, we have just been building it up. Fred Smith came on as the Event Coordinator a while back, and we’ve been going strong ever since with an event every month. We have a ton of great sponsors, and are able to give out cool door prizes at each event.

We decided to launch open-movie projects like ‘Galactic Battles’, as well as host Pub Nights and Video Game Expos as a part of expanding our member base and connecting the local community.

When can people expect the final film to be released? Where will they find it?

We are hoping to have the final film completed by late 2015. If all goes well with funding and planning around schedules, it should be completed by about October or November 2015. So far, we are on track, so I would expect it to run smoothly. We will be releasing the film on YouTube when we are finished. We may be putting it on Blu-Ray / DVD for anyone that would like a hard copy, but we are still working with Microsoft on the legalities of that.

Where can people find more information about getting involved with the Galactic Battles project? Are you currently looking for any specific roles or areas of expertise?

If you would like to help us out with financing this project, we are launching an IndieGoGo crowd funding campaign that will help us with some of our larger expenses. If you aren’t able to donate, help us by getting the word out. Any support you could show us would mean the world to us!

This is a pretty tough question… Not only because I’m a fan of both franchises, but because the science for each show is so completely uneven. For example, even a small ship from Star Wars can dish out approximately 10 times more energy than a ship 20 times it size can handle.

Then on the other hand, Star Wars uses primarily lasers… which is completely ineffective against Star Trek shields. (I took my reference from Star Trek: The Next Generation episode 204, ?The Outrageous Okona?, where Captain Picard and Riker laugh at the fact that an enemy ship is firing at them with lasers).

If we were to disregard the pure science of it (which we have to for the film), I would have to say Star Wars. Their numbers are much greater than Star Trek, and the primary function of their ships is for war. Star Trek, on the other hand, is primarily for science and are more peaceful. Unless, of course, the Enterprise took out the shields and then started beaming nuclear weapons on board Star Destroyers…

If you are looking to support by funding this non-commercial, open source collaborative community project, hop over to their Indigogo page https://www.indiegogo.com/projects/galactic-battles-open-movie-project

Back to Press Page